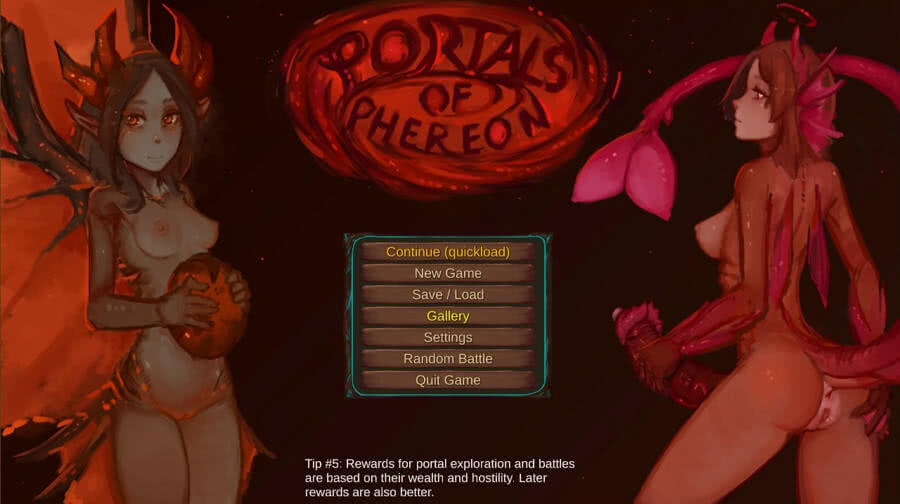 Maincharacter is currently a female(or futa) human (still not quite sure about that. Maybe she will be a unique species that cannot be found anywhere else, making hybrids between her and anything else also unique). There will be a lot of base species (currently only 7 (Centaur, Harpy, Angel, Succubus, Mermaid, Plant, Lavagirl)) and all possible combinations as hybrids as your characterpool to recruit from/ breed. Npcs will mostly be variants of those species or completely unique ones.

Most things (especially Pictures/events/Scenes/Npcs etc.) are really placeholder-ish, but most of the core features are implemented in a way so it is extremely easy to add/change stuff.

Seeded runs:
Can play quickruns (skipping charactercreation) based on a seed, affecting starting traits/element/characters/profession etc.
(Unlocked traits etc. don't matter. Can still do achievements in quickruns to unlock stuff for normal runs)
some settings are the same for all quickruns
shorter (15 days) runs with some adjustments.
Small changes:
watermermaids now have watertrail onmove
detailed descriptions for starting selections can also be seen in journal
producer only gives 50% bonus instead of 100% (bonus is applied every generation in addition to increased value.)
more things are based on a seed
Bugs fixed:
days sometimes didn't fully resolve, causing some other problems
instantbreed points always increased when you came back from a portal (not based on actual days passed)
stability worldmodifier affected story portals like the final mission and didn't affect basic portals
during sextraining, bonus for cumming at the same time didn't reset
quests didn't consider modified stats (strong trait etc.) when submitting characters
when enemies initiated combat, biome was ignored
IceBeasts didn't have the mount trait
freeze checked own status rather than target for validity
event softlock was still possible if events stacked in the same location. Also put in safety, if an event somehow ever has no option it will just end
zookeeper gave all characters exp each day (instead of creatures only)
Weekly runs:
I'll probably try doing some weekly event thing (no guarantees):
I'll post a weekly seed in discord
beat the game (without cheating) on that seed to enter a raffle (post .sav in discord)
winner can decide something I'll add ingame (has to fit in the game. unique character/specialhybrid/event/outfits etc.)