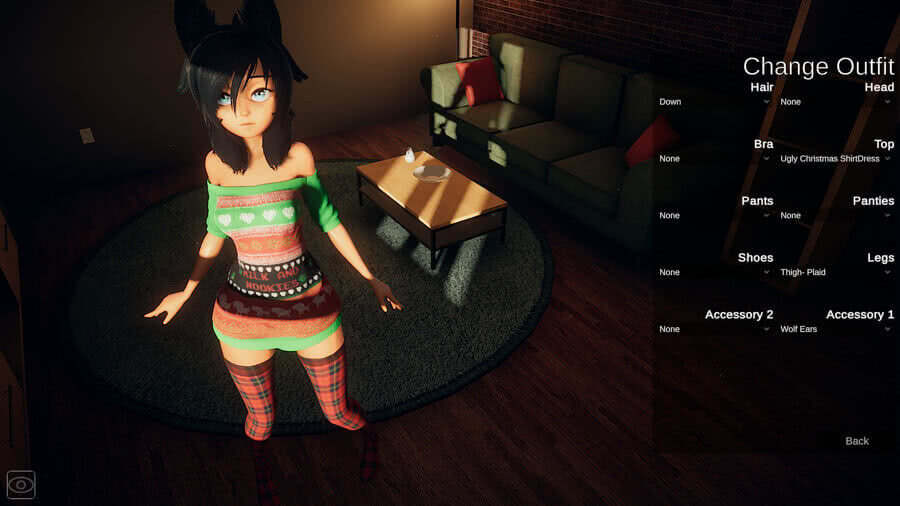 Naomi 3D is a sample animation to show our goals for "Our Apartment" the next game we'll make after The Couch finishes it's core release content. This game will be a sequel to The Couch, and offer a lot of the same features in more of a 3D format plus a lot more thanks to the benefits of 3D. But for now this project will only be short sex animations we'll release occasionally when releases for The Couch are slower. For now we just want to demonstrate what we can do and offer more public content! Keep in mind all assets and content here are work in progress or temporary. In the future there will be significant improvements to the visuals and content. Along with audio mixing.

Random Outfit Toggle! You can now disable Naomi automatic swapping outfits in the settings. Want Naomi to live like a wolf girl? Now you can! While this is a QoL feature it may change a bit to avoid conflicts with story stuff in the future, but this should always be an option from now on.UI Tool Tips! Among some other UI issues fixed, I heard this quite a bit from people, so now when you hover over some UI items, you'll get a tool tip on what the button is. It might be a bit iffy sometimes though, usually after selecting a button.SSAO Improvements! I finally was able to figure out why the better SSAO settings didn't work and now that's added. Resulting in a much nicer effect that was seen right before changing to URP a while ago.Many UI Improvements! The first implementation of the UI had much lacking, and a lot of things have been improved! For example, UI scale is no longer enabled at default. And some instances where the UI would not change on highlight has been improved. More work is still needed ofcourse.Ultrawide screen is fixed! This went under the radar for a while and I have no idea how long this has been busted, but given how it was related to an Android issue probably for a long time. I can't fix these things if people don't tell me about them!TONS OF BUG FIXES! A lot was broken last build despite the many improvements. This release seems to be very functional fixing some core issues. Thanks to everyone on the discord testing and helping me find problems! It's impossible for me to look through everything.