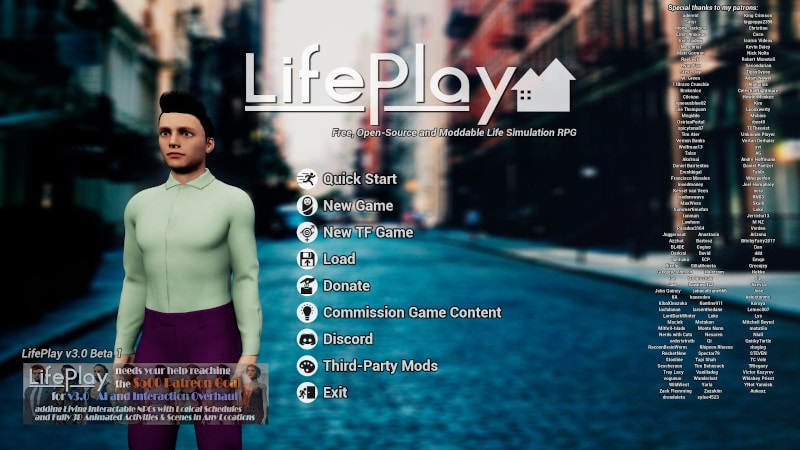 LifePlay is a life simulation RPG that allows you to play in 32 (and counting) real world cities with real world buildings. The game has extensive character customizations and non-grindy gameplay and includes a range of life situations (189 scenes and counting) where your choice matters. The 3D sex scenes allow player control without forcing it, enhanced by well-written erotica. Although this is the first release, the game has actually been under development since the end of 2017, you can easily get a few hours of gameplay, especially if you try out different character builds in different maps. All game versions and their sources will be released to the public immediately. It's also very moddable, just check the Docs folder for information.

- This is the first Kink of the Month update for September, focusing on At Work. Since it has been quite a regular winner, this is the last update where I focus on adding scenes for the office job for the foreseeable future. Whenever At Work wins next, instead of a brainstorm, there will be a follow-up poll on which career path to add next instead.- Lunch break scene triggered occasionally, where you simply get a boost to rapport and attraction to numerous colleagues where appropriate.- Action where you can encourage an NPC (including your SO) to apply for a position at the company you work for. Your own boss may insist on interviewing your recommendation, going various ways depending on their personalities and whether NTR is enabled- You can now invite one of your contacts to work as the PA.- Depending on their intelligence and interpersonal, your PA will sometimes help you share the workload or secure a new client, boosting your own jobperformance. You can simply praise them, give them a gift, treat them to a nice dinner (can be extended to become a date) or admit they're too good to be a PA and recommend a promotion for them instead.- Your boss borrows your own PA or SO working with you to accompany them during a business trip. If NTR is enabled, whoever it is may end up sleeping with the boss and even being pimped out to other executives as a sort of "sealing the deal" incentive.- If your SO's working in the same office, after 5 PM you may get a scene where your SO asks to go home together, there they can ask if you want dinner, a shower together or straight to bed for some stress relief. A single colleague may see your great chemistry and feel a bit down, and you two can be nice and invite them over for dinner as well. Obviously, threesome potential or your colleague may end up meeting a relative living with you instead.- If your SO works with you and have low perversion, they may get unwelcome advances from the boss and asks for your opinion before going to HR. There's only a small chance you get a new boss if you encourage them, much higher chance your job performance suffers (which in turns affects your promotion / getting fired chances). However, if you keep telling your SO to not 'rock the boat', your relationship will suffer and they may quit or if NTR is on, they'll eventually sleep with the boss.- If you've slept with your boss and your SO's working with you and has lower jobexperience than you, they eventually confront you on how you keep getting these promotions. You can lie or encourage your SO to do the same if your boss is also interested in your SO - or depending on the boss's submissiveness stat, the boss may want to watch your SO bone their SO, or want to make your SO watch them bone you in exchange for a promotion for them as well.- If you work past 10pm, another colleague working late may ask you to walk them home since they have to walk past a dodgy part of town to get home. If you refuse, they ask another colleague and there's a small chance the two of them show up the next morning as a new couple. They may invite you inside ... or if 'Rap... music' is enabled, you may get ambushed during your walk.- Some more bug fixes. I will continue to work on more bug fixes in the next update, alongside Kink of the Month