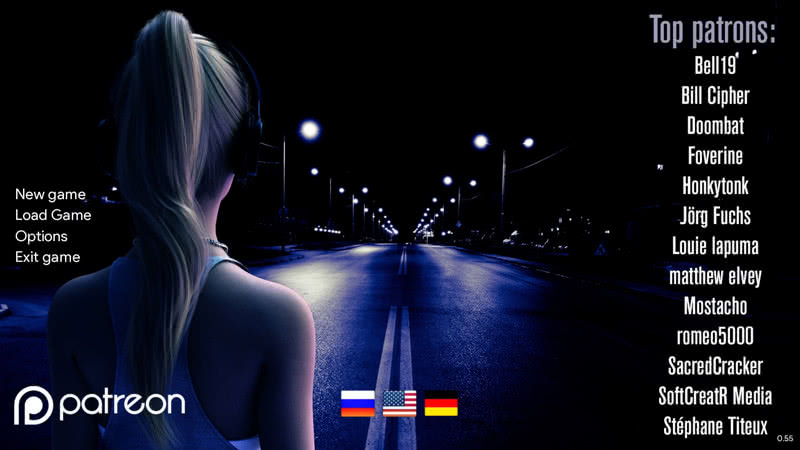 The game is based on the concept of an open-world sandbox with a main storyline. However, this time we are doing it on a completely different level! In the current version you can meet the main characters, learn about their background and game setting in general. As you can see in the screenshot, the game will take place in the modern world. The main character will be a girl. The genre of the project can be described as a sandbox with elements of the quest an RPG.
About compressed version

A big event after the 3rd concert with many familiar ladies. If you have already played this concert, then this event will start automatically.
Tanya will now sometimes paint in the park. You can talk to her.
Alex will be able to visit the Mistress in her office. You can learn more about the Red Quarter and about the Mistress personally.
Webcam broadcasts have become repeatable. There are now 2 stages of nudity available.
New collectible - Tara's paintings. At the moment there are 3. For them you will receive special art points. Points can be spent on changing the appearance of some characters in the NPC menu. Just for fun.
New hot event from Kevin and Julia.
Alex's new outfit is a robe. Alex will wear it after showering.
Acquaintance with the competitors of the Mistress. Go to the highway. (+ 2 new NPCs)
Lots of new pornhub images.
During casino harassment, you can afford more.
During pregnancy, Alex will feel nauseous until she has an abortion.
+ 5 new achievements
After creating a tattoo, the mood spoils.
Ingrid's new appearance
Security guard in the casino. If you get harassed, he can help.
If you persuaded Margie to buy a sexy dress, she will sometimes wear it.
Alex will be able to shower while Valerie is in the tub.
Alex can get rid of nicotine addiction by abstaining from cigarettes. However, quitting smoking causes depression. We'll have to endure.
A new state: depression and pills for it.
Ash and John are now shown in the park.
Fix display of goods from a candy store.
+ 1 bonus card
Some interface improvements.
Many other fixes.
New scenes:
Hair drying scene after shower and bath.
Lack of panties on the subway.
You can show off your new car to Valerie.
A reading scene has been added in the library.
Vaping on a park bench.
New locations:
Bathroom in the dorm.
Redesigned old locations:
City center
Dorm
Rose Street
Rose Street library (+ cute library worker)
Redesigned old scenes:
Director and Jill
Ruth's Lessons
Record yourself on video
Solarium scenes
Meeting Ash on the stairs at night.
Some scenes in the Glory Room.
Shared morning with my sister.
Valerie is in the bathroom.
Updated sprites:
Julia
Ruby
Fred
Jill's house owner