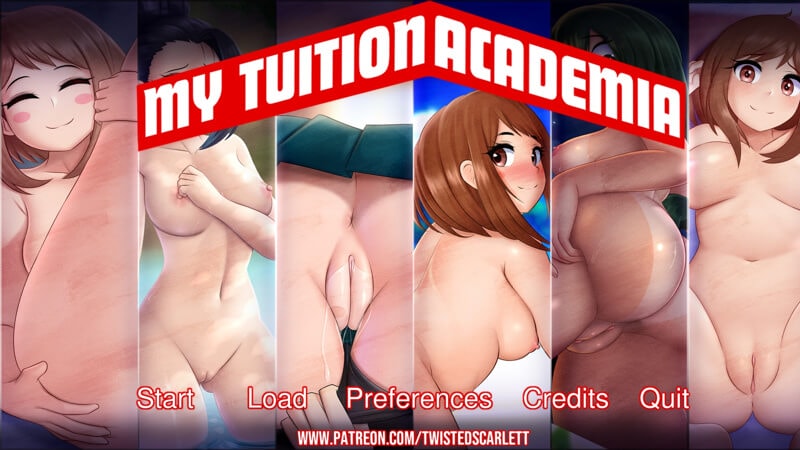 My Tuition Academia is a life simulator game where you take control of a female brunette protagonist. You're tasked with the goal of earning as much money as you can while balancing the day-to-day of college. It's a perverted world out there, and you can either use it, or it can use you!

Major:
Yomo Route Event: Yomo will now ask if you want to be her girlfriend if you visit again after the Sixty-Nine, this will unlock her ending regardless of your choice
Yomo Route Ending: Complete Yomo's Route.
Yoko Route Ending: Complete Yoko's Route.
Dominatrix Ending: Complete the Dungeon.
Sex Addict Ending: +200 Sexual Desire.
Prostitute Ending: Sell Sex in every location.
New Outfit: Dominatrix
You can now rename your crush/boyfriend. (Can be done through the cheats menu too)
You can now study with your crush/boyfriend.
Accessories: Slime Hair and Body, unlocked after Slime Girl ending. Not reflected in Sex/Event CG.
Minor:
Endings Menu: Now separates unseen and seen endings for clarity.
Blackmail Event: The dialogue where you get the lewd formal outfit doesn't repeat.
Hero Suit Event: No longer triggers on weekends
Beach - Sunbathing: Requirements are now enforced and the sexual desire gain when flirting now scale with perks/quirks.
Dungeon - Suspended: Now shorts pregnancy.
Anal Queen: Skipping vaginal at the massage parlour now sticks, allowing the route to be progressed without any vaginal sex.
When Cumflated: The hospital won't unlock.
When Cumflated: Your Boyfriend no longer acknowledges it as pregnancy. Taco will now try to explain that she just put on weight.
Buying Alcohol: Can no longer spend more money than you have.
Pregnancy tests now tell you how many days are left in your pregnancy.
New Advanced Cheat: Natural Pregnancy Speed (1x, 2x, 4x, 6x)
Club Misc: The first time you would be invited to go clubbing, if you have over 30 sexual desire, it now occurs as a non-random event on any day to make unlocking the club much easier.
Park Misc: Unlock event now also procs if you have 100 sexual desire, and the character will be wearing the bar outfit outside for the event.
Everything in the Shops are now slightly more expensive. (To compensate with money gain buffs.)
Fixed Introvert not procing its multiplier during the afternoon after you spend the morning outside.
You now have to meet Susu before the Onsen hand job option appears.
Selfie Star now appears in the cheats menu.
Gloryholes, Selling Panties, and Prostitution now show your scaled money earnings in dialogue and choices.
Ensured that every instance of moaning is on the voice track.
Scares now only happen once per instance of the game. Taco will sometimes acknowledge the player if you try to rewind.
Anal Queens can no longer skip the massage parlour scare.
Fixed scenes where nipple piercings appear even if you take them off.
Plenty of coding and typo fixes.