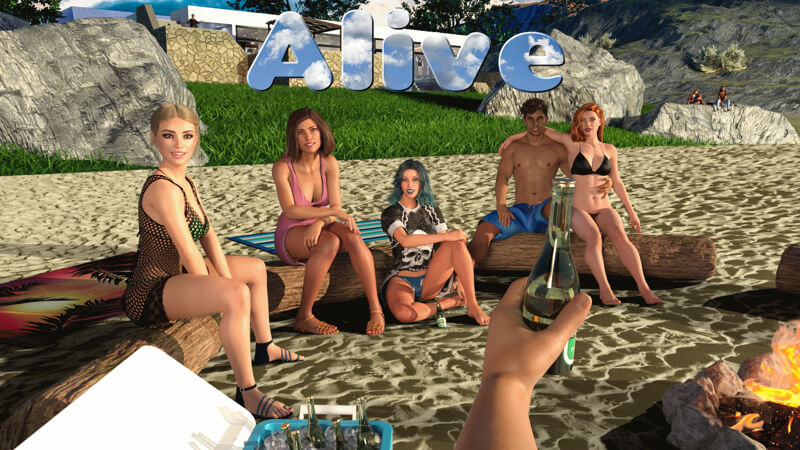 You've lost your job, but that's ok you work too hard anyway. You've lead a pretty boring life so far, so many this is the perfect opportunity to change things up, and feel what it means to be Alive.

- Added Ch4. Duh. Ch4 consists of approximately 700 new images, and ~22 new animated scenes. (It's actually 27, but 5 don't really count). Also 17 new music tracks.- Added a small display when you play minigames - now before you choose your workout routine, you'll be able to see your current stats in the top left corner of the screen. I plan on adding a full stats screen that will likely also contain RP values (Maybe some other stuff? idk yet) in the next release, but for now the minigame stat screen should suffice.-Fixed a TON of rollback issues related to minigames. You still can't rollback in the middle of the workout minigame, but all other times it should work fine now. Not applicable if you disable minigames.- Added a new minigame! This one isn't repeatable like the last, and it's only available on one path, but it was fun building it, so it's there. There's no tutorial for this one, but it's pretty self-explanatory and doesn't actually mean too much except for a slightly different scene (and possibly a hint about the future).- Addressed a number of other very tiny bugs I came across from old versions. Most should be fixed now. (I make no promises that new ones weren't created in the process.)-Ch4 includes a number of text messages, much like previous chapters. Unlike previous chapters, the phone opens automatically throughout chapter 4. Moving forward there will be a mix of both behaviors. Sometimes the phone will open automatically - other times you will need to interact with it, depending on the situation. Interactions from Ch1-3 have been left as-is.