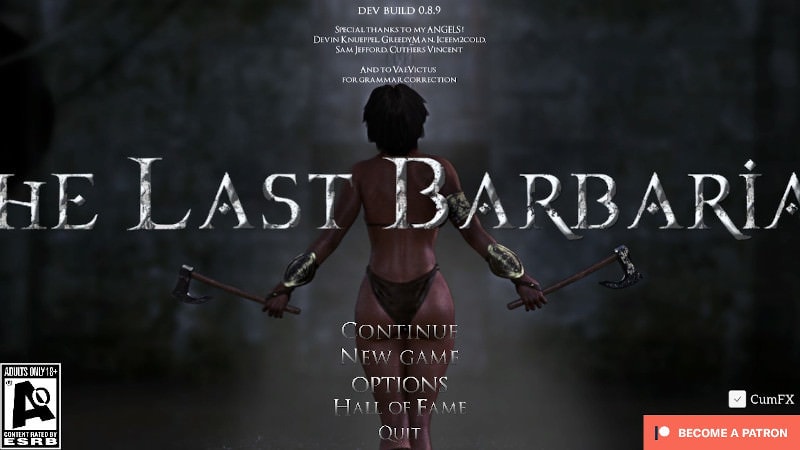 "The Last Barbarian" — is a third-person action role-playing game. You are encouraged by the game to proceed with caution, learn from past mistakes, or find alternate areas to explore. If you are not careful, monsters will be able to have sex with you and you will have to start from the very beginning. “The Last Barbarian” takes place in a fantasy N'ul-realm, plunged into darkness and debauchery after the arrival of the ancient Goddess of Flesh. She gives everyone what they want most. But she distorts all desires and so the whole world is plunged into perversion and violence. Everything around is nourished by sexual energy. The protagonist of the game woke up in the dungeon after the battle with the orcs in her village. She is the last barbarian from a tribe of local Amazons. They never submitted to anyone and valued only their freedom and love. But now she is driven by a thirst for revenge and a desire to revive her tribe.

Improve, expand and modify the existing lewd contentDisable unnecessary dialogue if Barbarian has moved forward in the storyGet rid of the mess in the quest logAnd of course, simplify the walkthrough of the game and the availability of scenesHere are the changes, by location:DungeonRemoved extra quest itemsRemoved repeated dialogue when turning the lever in the cellHall of TortureDialogue with the Goddess of Flesh changes depending on whether the barbarian is a virgin or notThe “Mother of Tentacles” lewd event is fully reworked: Multi-camera support, scene speed control, and repeatability.Stormwind ValleyAdded short dialogues with guards about N'akhzeranYou don't need to work as a prostitute to seduce the Devenant guard anymore (offer yourself menu)Witch HutRemoved unnecessary dialogue branchesChanged dialogue about Torus and BurgildaBrothelYou can send an alchemist to look for his journal in the brothel. In this case, he will prevent your work.Sex on the table was added, with multi-camera support and scene speed control.If you refuse customers often (more than 3 times per session), the owner of the brothel will have problems with the guards.Blowjob scene added, with multi-camera support and scene speed control.Noria Tavern“Ask about GOF” dialogue addedBath salt tentacle event was changed, and a tentacle rub scene is added, with multi-camera support and scene speed control.Tentacle ride scene added, with multi-camera support and scene speed control.MineChanged dialogs with the default form of TorusAdded dialogs with modified TorusThe barbarian will not crawl into the cave to the dragon if she doesn’t see any reasons to do thisIf you get into the mines through a hatch in the city and open a locked door from the back, you don’t need the key anymoreTorus Secret Room4 Mothers game mechanic updated.I decided to simplify the grind a bit. Now, when you defeat cultists and succubi, they will stack to the room. You won't need to run from all over the location to attach the next heretic to the wall of fleshThe flesh wall saves the position of the heretic when you leave this room.Barbarian can use the wall for her own pleasure, with multi-camera support.You no longer need Burgild to complete the ritual in the room.Now to get the Servant of the Gods ending you need:Find the book of portals in the Letel dimension.Inseminate 4 heretics with the living armor.I also plan to add a bonus ending for a virgin walkthrough. I will update the walkthrough of this line tomorrow. The flesh wall model has been updated.Flesh wall Poses:Stick hands insidePussy RubRestrain handsRestrain limbsRestrained tentacle sexBreed heretic with living armor (Speed control. Multi-camera support)N’akhzeran3 lesbian sex scenes rebuilt. (Speed control. Multi-camera support)3 sex scenes with male cultist redone (Speed control. Multi-camera support)1 Tresome sexscene redone (Speed control. Multi-camera support)2 Tresome sex scenes added (Speed control. Multi-camera support)Pray for money cost is 5 gold nowPray mechanic has been changed.Dialogue changingHellBurgild and Beeh Dialogue changedYou don’t need to find Burgild among Succubi.Bug fix:Asking Mister Clay to allow or remove the orcs from Devanant costs 100 gold but it only takes 50 gold - fixedInternal controller rotation error - fixedDoug orgy in the Inn animation issue - fixedGloryhole, taking client from behind clothing issue - fixedWitch hut. Taking futa witch from behind keeps clothes on - fixedNoria Tavern hot bath tentacle scene clothing issues - fixed.Letel dimension, Succubus appear FX issue - fixedLetel dimension, Succubus material visible seams - fixedLetel Dimension, camera transition too slow - fixedHell - Burgilda material visible seams - fixedHell - Burgilda Idle animation fixedWitch hut. Barbarian become futa. Black screen softlock. -fixedWitch hut. Barbarian futa model normals issue - fixedWitch hut. Barbarian having witch scene, wrong gens position - fixedWitch hut. Softlock for particular menu items (some items are not shown) - fixedHugh hut and City Hall locations. Hugh textures seams - fixedHall of torture. Evil cultist texture seams fixedStormvind valley devenant guard enter softlock - fixedMine. Goblin texture seams - fixedMine. Torus default form texture issue fixed.Mine. Torus changed form texture issue fixed.Mine. Torus dialogues quest softlock - fixedTorus dimension. Barbarian floats in the air at start sceneYou can use living armor if you didn’t beat your clone - fixedCode cleaning.Removed deprecated quest line “Path of the revenge” (all quests will be removed soon)