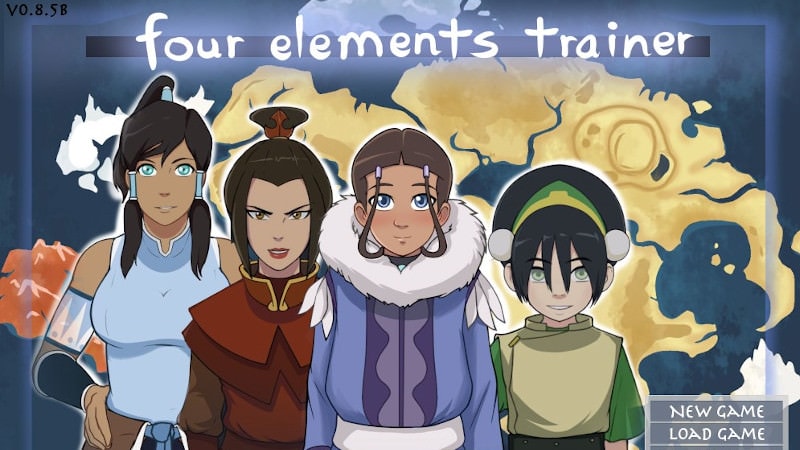 Four Elements Trainer is a massive undertaking set in the universes of Avatar: The Last Airbender and The Legend of Korra, and will be four complete games all united into one. Along the way, you'll find plenty of (fuckable!) characters, quests, stories, fights, and mysteries to unlock.

-Both Korra and jinora will be able to win at cards during the evening. This will result in the standard butt fun reward for winning at cards. I added vaginal as well. Scenes for both of them will be much alike so if you picked only one of them during your time in book 4's love route, don't feel like you're missing out.-Kya and asami will continue to try and get pregnant with your help, but this time they'll have to lick and suck their way to getting some of the mc's "milk".-You'll find out what that little book with a lock is all about. The one you found in the treasure chest in the grotto. Was it really left behind by pirates in the past?! you'll find out.-Zhu li get's to try out different swimsuits! But there's a problem and you'll have to help her and Varrick get some privacy to do what they need to do. The reward will be Zhu li shaking your and Varricks'... something... while other things bounce up and down. Doing different outfits is fun(but a lot of extra work). My personal favorite is the pink one.-Speaking of bouncing, if Ravka is present and you buy her a swimsuit... she'll also show you something bounce when you engage in a friendly fight with her. PS, if she's pregnant that won't work because that was just... not an option. You'll understand once you see. Don't forget you can undo that pregnancy in the shack. Small tip during the fights, a mouse click only registers when you release the button, pushing enter though immediately registers.I added Korra's pubes on Ember Island. Not everywhere yet though, but the new scene has it.I slightly changed and added an older Opal butt fun scene.Last but not least. What's a nude beach without Ty Lee walking by... on her hands!I think that's about it. I kept things pretty straightforward.