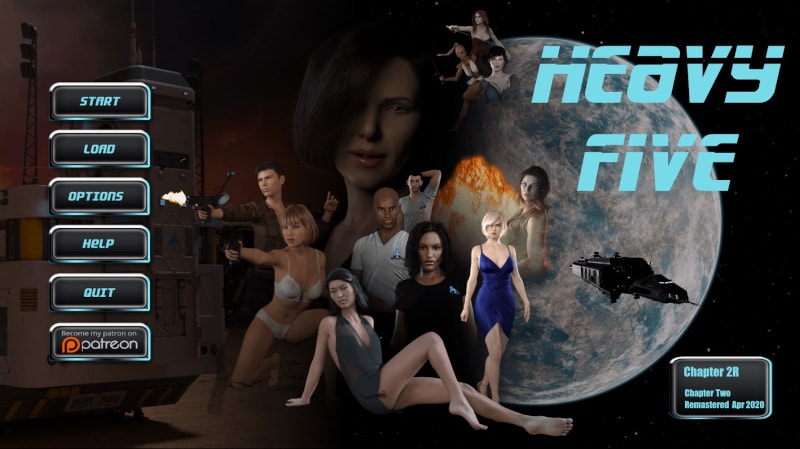 You are a engineering officer aboard the deep space vessel Intrepid, which is currently engaged on a series of resupply missions for those tenuous outposts humanity has so far been able to establish. Relaxing off duty, you find yourself hastily ordered as a last minute replacement for an injured crew member on a mission to resupply a science station on the planet Ophion which has been experiencing a series of unusual events...

Heavy Five is a ten chapter story being released in complete chapters with over a dozen characters, a mission to complete and a series of mysteries available to explore. Of course the biggest question in this story is will you be the hero of it? Or will you ultimately be be the villain?
About compressed version
We used some strong tools, so quality of compressed files may be lower than the original. Also we used some webp codec and webm directshow filters you may have to download and install. We recommend to download full version to get 100% of game experience.

Chapter 3 Remastered:
2,048 still images; 79 animations made up of over 9,000 renders; Guns! Girls! Gadgets! Bewbs and even sex! (I know, right? In my game? But true!) Mysteries, new lore, new characters, one hell of a scene with Chris, combat, a multitude of paths and branches and of course some truly terrible jokes.

Chapter 2 Remastered:
It's now, following some tweaks, over 1,400 renders, twenty animations, 10,000 lines of code and I've lost track of the word count. Easily over 40,000. Playing time is coming out on average at around three hours for a single play through which, given there are no repeating loops or grind is not too shabby at all.
I should add that there are over 40 paths available to you in this release and so completionists may find themselves with a bit of a challenge... Paths will vary depending on gender, race, choices, discoveries etc etc and most of the playtesters have not yet found all the content. Some of which is hidden outside the game files.